Exciting news, but the next few weeks will tell if it’s all true.

Jerome Powell, the Federal Reserve chairman, said that the Fed is on track to raise rates in two weeks. The speech today was a part of the Fed’s semi-annual monetary policy report. 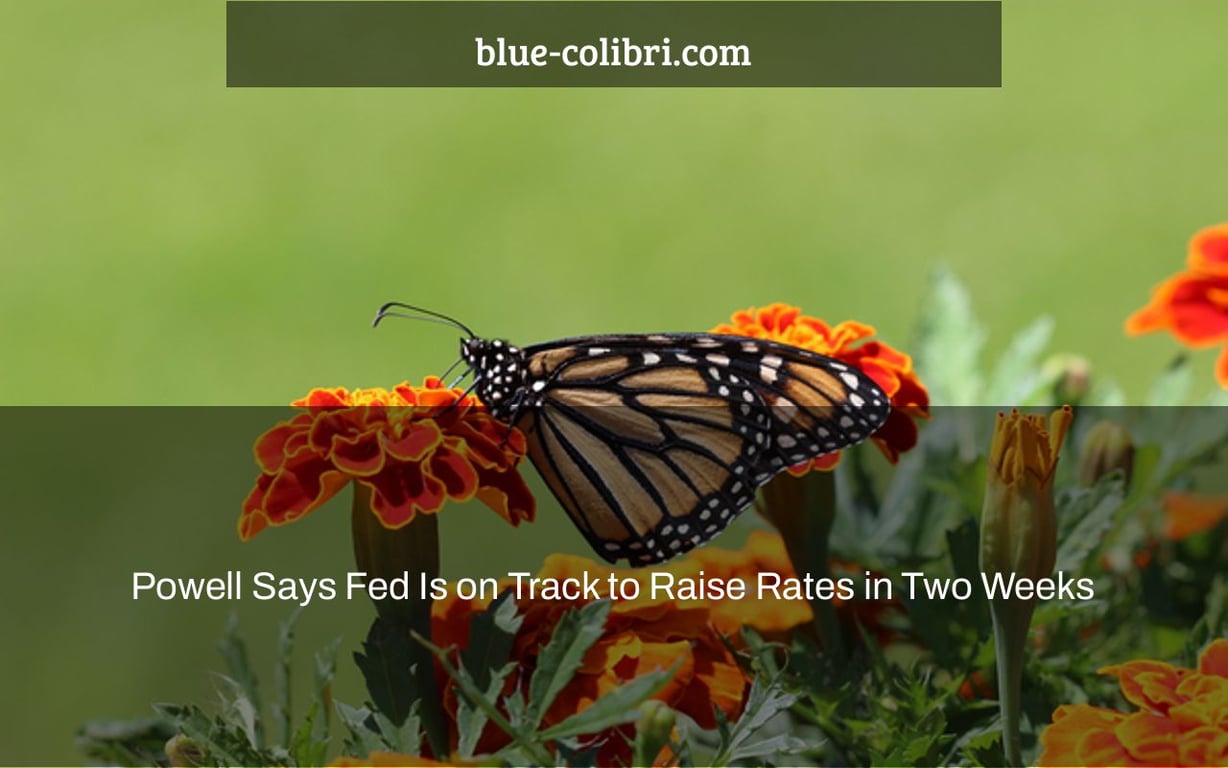 Mr. Powell said on Wednesday that, prior to Russia’s invasion of Ukraine last week, he anticipated the central bank to boost interest rates again this year.

Mr. Powell told the House Financial Services Committee on Wednesday, “For the time being, I would say that we would move cautiously along the lines of that strategy.” “We’re not going to add to the confusion in what is already a very difficult and uncertain time.”

While it was too early to predict how the conflict and harsh sanctions imposed by the West against Moscow would affect the US economy, he expressed a general need to tighten policies further.

‘The near-term repercussions on the US economy of the invasion of Ukraine, the continuing conflict, the sanctions, and events to come, remain extremely unpredictable,’ Fed Chairman Jerome Powell told a House committee on Wednesday.

Mr. Powell essentially put an end to a market and Fed official discussion over whether to raise rates from zero this month with a greater half-percentage-point hike. Simultaneously, he lay the framework for half-point rises this summer, rejecting the notion that the Fed’s pace is limited to quarter-point increases.

According to the Fed’s favored metric, consumer prices jumped 6.1 percent in January from the previous year. Core inflation, which excludes volatile food and energy categories, climbed 5.2 percent, close to a 40-year high. Mr. Powell told legislators, “This is strong, high inflation, and it’s critical that we get on top of it, and that’s precisely what we’re going to do.”

Mr. Powell said that his colleagues anticipated inflation to reach a high and then decline quickly. “We would be prepared to move more aggressively” by increasing rates by a half percentage point at one or more meetings later this year if inflation comes in higher or is more consistently high than that. Since 2000, the Fed hasn’t hiked rates by a half point.

Mr. Powell also said that he expects the Fed to make “excellent progress” in developing its plans to reduce its $9 trillion asset portfolio, but that those plans would not be finalized at its March 15-16 meeting.

The global economy has been recovering from a series of “supply shocks,” which occur when commodities or services are in limited supply and prices rise as a result. According to textbooks, central banks should concentrate on underlying inflation pressures rather than reacting to one-time price rises caused by transient events such as natural disasters.

Officials are now concerned, however, about an overheated labor market with salary growth far beyond pre-pandemic highs, as well as the danger that consumers and companies may anticipate even larger price increases in the future, resulting in consistently higher inflation.

Last spring and summer, Fed policymakers ascribed much of the increase in inflation to supply-chain bottlenecks, which didn’t need a policy reaction if the kinks were projected to be resolved in a few months. Mr. Powell argued on Wednesday that rising inflation was the outcome of a combination of strong demand and supply restrictions. The focus on demand is critical because Fed interest rate hikes may bring supply and demand back into balance by reducing hiring and overall economic activity.

Mr. Powell said that a labor scarcity was pushing up salaries, and that the Fed was keeping an eye out for indicators that the situation in Ukraine may push up prices even more. If bottlenecks were alleviated and more employees returned to the job market, the Fed wouldn’t have to hike rates as much, he added.

In reaction to persistently strong inflation, the Federal Reserve has indicated that it intends to hike interest rates in 2022. J.J. McCorvey of the Wall Street Journal outlines what rising rates may mean for your money. Todd Johnson provided the artwork for this article.

“To be honest, we have the instruments and will utilize them to bring inflation under control,” he stated, “but the more support we can get from the supply side, the simpler it will be.”

His comments highlight the central bank’s difficulties as it prepares to boost interest rates for the first time since 2018. The Fed normally avoids adopting actions that enhance uncertainty during geopolitical shocks. However, with inflation already over the Fed’s objective of 2% and the Ukraine conflict threatening to drive prices even higher, the Fed may feel compelled to hike rates.

What steps are you doing to prepare for Fed rate hikes? Participate in the discussion below.

Mr. Powell mentioned the potential of unexpected and downstream impacts of increased prices for oil, natural gas, and other commodities for which Russia is a big exporter, such as neon, palladium, wheat, and fertilizer, although Russia’s direct trade relations to the US economy aren’t considerable. “Events like a conflict… will push up the price of oil and gas, which will inevitably affect pricing,” he added.

Members of Congress challenged Mr. Powell on the Fed’s earlier prediction that inflation would subside more swiftly on its own last year. Last December, he stated, “I always believed there was a possibility we’d be wrong, and if we were wrong, we’d be able to pivot, and we did turn, and we pivoted very swiftly.” “However, at that time, the economy was growing at a breakneck pace.”

Nonetheless, he said that the labor market was robust enough that the economy could absorb higher interest rates. He expressed optimism that the economy will slow sufficiently to limit growing prices and wages without causing a recession or a period of high inflation similar to the 1970s—a so-called “soft landing.”

“We haven’t encountered this difficulty in a long time,” Mr. Powell said, “but we all know the history and we all know what we need to do.” “I believe it is more probable than not that we will be able to accomplish a smooth landing.”

“There are no certainties in life,” he remarked later, when asked whether the Fed’s reaction would have to be so robust that a gentle landing would be impossible. That, however, is our objective and what we want to accomplish.”

Nick Timiraos can be reached at [email protected]

In an interview with CNBC, Powell said the Fed is on track to raise rates in two weeks. He also spoke about how he believes there will be no recession in 2019. Reference: higher interest rates.

The final March of Coach K