Supply chains for international businesses are becoming more complex and risky. The world has seen a dramatic escalation in sanctions on Russia, War in Ukraine and Covid in China which have had an impact on global supply chains.

The “supply chain management” is a process that has been used for centuries. It is a system of moving goods from the point of origin to the point of consumption. This process has been completely transformed with sanctions on Russia, war in Ukraine and Covid in China. 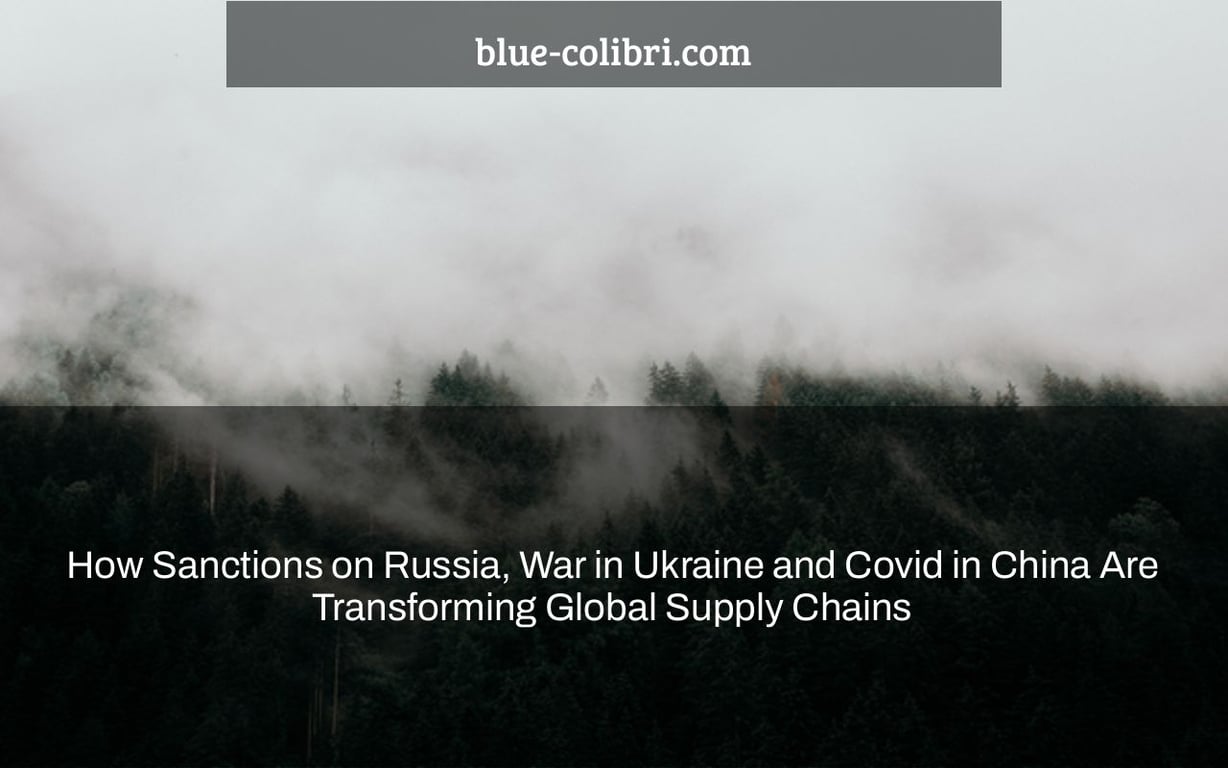 For the essential supply lines that carry the majority of the things we depend on for our everyday life, a new global order is forming.

Companies, particularly those in the technology sector, are challenging the orthodoxies of the previous 50 years of globalization. Those orthodoxies include never keeping spare inventory or components and always searching out the lowest-cost manufacturer, no matter how far away. In the decades ahead, the transition that is already underway might result in the migration of employment and production worth hundreds of billions of dollars in economic activity.

The world’s supply chains are growing more like supply webs as corporations establish more plants in more places and acquire components and materials from a wider range of vendors.

Millions of sailors, truck drivers, longshoremen, warehouse employees, and delivery drivers keep mountains of products flowing into shops and homes every day to fulfill customers’ growing demands for convenience. However, the global economy’s sophisticated flow of products is significantly more fragile than many people believe. Adele Morgan is the illustrator behind this image.

Modern supply chains are meant to be cost-effective, but they aren’t always reliable. Supply chains for most items have become longer and longer since the advent of the shipping container in the 1960s. Manufacturing could be moved to where wages were the lowest by making transoceanic and transcontinental transportation inexpensive and dependable. As a result, most factories relocated to the other side of the globe, mostly to China. But it also meant that, particularly for intricate gadgets like cellphones and computers, materials may traverse the globe numerous times as they were synthesized into parts, subcomponents, and eventually completed goods.

Gadgets, which have more components obtained from more countries than practically anything except autos and complex industrial equipment, have shown to be particularly reliant on three aspects of global commerce that were previously taken for granted. The first is that raw resources will always be inexpensive and plentiful. The second point is that shipping will always be a percentage of the value of the products being transported. The third point was that this delivery will be dependable at all times.

Many businesses realized that these assumptions would not hold true once the United States and China began a trade war in 2018. Then came the Covid-19 epidemic, which emphasized the issue. Sanctions against Russia, the continuance of the trade war with China, natural catastrophes, and the loss of production and transportation capacity caused by the invasion of Ukraine look to be making globalized supply chain problems chronic.

For many businesses, the pandemic-induced halt in globalization is morphing into a wide effort to find out how to strengthen supply chains by adding additional factories, suppliers, and material sources. By no means is it deglobalization, but it is a costly and time-consuming reorganization of where products are created.

A depiction of an Intel facility in Ohio, one of many multibillion-dollar complexes the chipmaker intends to develop in the United States and Europe.

All of those supplies and resources have to come from someplace. According to Nathan Resnick, president and co-founder of Sourcify, which helps firms identify and manage factories in Asia, this change from supply chains to webs is known as “multiple sourcing.” It has long been standard practice in the supply chain to have multiple suppliers for goods and parts, but with the recent trade wars, more companies, including small and medium-sized businesses, have been forced to do the difficult work of setting up additional factories and synchronizing the quality of goods across them, he adds.

Willy Shih is a Harvard University professor who serves on a commission that advises the US Commerce Department on ways to strengthen domestic supply chains. He detailed how the epidemic has served as a wake-up call for executives, and how the globe seems to be heading toward firms and nations finding out how to shift supply chains inside regional trade blocs of politically aligned countries in a recent piece.

At the same time as businesses are becoming more aware of their susceptibility to supply interruptions, governments are putting a greater emphasis on ensuring availability to critical products for national security reasons. These regulations are known by a variety of names. This shift toward self-sufficiency is referred to in China as “dual circulation.” It was revealed in the country’s 14th five-year plan in May 2020. The part of this concept that deals with technology has been dubbed “Technological Sovereignty” in the European Union.

This facility in Chennai, India, is now producing iPhones for Foxconn.

The Commerce Department of the United States has passed a slew of laws, executive orders, and rules targeted at strengthening domestic supply chains. The $52 billion Chips for America Act, which was enacted but not yet financed, aims to bring microchip production back to the United States. The objective is to reverse a decades-long trend that has lowered the United States’ share of global chip production from over 40% in 1990 to less than 12% now.

Bringing technology into the household

Manufacturers aren’t waiting for the Chips Act because demand for microchips is expanding so rapidly that chip producers can’t keep up. They’ve unveiled a slew of new factories all across the globe. Taiwan Semiconductor Manufacturing, or TSMC, the company that makes virtually all of Apple’s latest-generation processors, is investing $100 billion over the next three years to expand its capacity, including new plants in Arizona and Japan. Intel has committed to investing $95 billion in additional manufacturing capacity in Europe alone, as well as $20 billion in a new facility in Ohio that might become a $100 billion investment in the future. In Texas, Samsung aims to build a massive $17 billion factory. Even older-technology chipmakers, like as Texas Instruments and On Semiconductor—companies that are still vital for autos and appliances, as well as humdrum duties in certain modern gadgets—are investing in new and enlarged facilities.

Encouragement of these investments has become a rare example of cooperation in Washington, with many members of both parties believing that financing economically essential businesses like chip manufacture is also crucial for national security. The financing of the Chips Act, according to H.R. McMaster, a former national security advisor in the Trump administration, is “very important.”

According to Klon Kitchen, a senior fellow specializing in technology and national security at the conservative-leaning American Enterprise Institute, the current global situation, in which countries are lining up in expansive geopolitical alliances separated by trade wars and actual wars, is reminiscent of the Cold War and even World War II. The US cannot afford to lose access to sophisticated microchips and other components and manufacturing essential to develop anything from weapons systems to smartphones and 5G networks if tensions between the US and its allies and Russia, China, or other ally states grow, he says.

Almost all modern microchip production is now centered in Taiwan, a self-governing island democracy of 24 million people 100 miles off the coast of mainland China that China’s Communist government has long claimed and pledges to reclaim.

According to Emily Kilcrease, director of the energy, economics, and security program at the Center for a New American Security, a Washington think tank that supplied talent to the Obama administration in the late 2000s, this situation represents “an extreme concentration that should make us worried.” “However, the fact that it’s in such a geopolitically sensitive place, considering China-Taiwan tensions, makes us even more concerned.”

Manufacturing in the region

Computer chips aren’t the only kind of technology undergoing a transformation into multisource supply webs.

In Arizona, chipmaker TSMC is building a new fabrication site.

China presently dominates battery manufacturing, particularly for electric cars. However, hundreds of new “gigafactories” for electric vehicle batteries are springing up throughout the United States and across the world—basically, everywhere there is a strong car manufacturing infrastructure.

Because Apple and Foxconn, its primary contract manufacturer, work together, the iPhone, an emblem of the world’s longest and most convoluted supply chains, continues to arrive on time. According to Dr. Shih, Foxconn took use of hefty subsidies even before the epidemic to disperse manufacture of the iPhone, dividing production of the gadget and many others between Shenzhen and western China. Foxconn has also moved iPhone production to Chennai, India, and AirPods production to Vietnam.

Southeast Asia has become a hub of regional “nearsourcing” of technology production. (When production is established up in nations near to where an item is consumed or where final assembly occurs—a typical example is when U.S. corporations transfer manufacturing from China to Mexico.) In Southeast Asia, whole Chinese factories are cloned and moved to nations like Vietnam and Thailand, where labor prices are cheaper while components and supplies are still made in China. Samsung Electronics, for example, manufactures the bulk of its smartphones and smart appliances in Vietnam.

With most countries in Southeast Asia attempting to maintain geopolitical neutrality, the region has the potential to remain a supplier to pretty much every nation in the world, says Dr. Shih. That won’t stop companies from trying to copy some elements of what is currently accomplished in this region—like the packaging of microchips, a step that comes after their manufacture, in the U.S. and Europe. The result could be Manufacturing in the region, where countries try to assure that, even if they don’t make something themselves, they can source it from an ally, he adds.

Even if we wanted to, recreating the entire electronics supply chain in the United States, from raw materials to finished goods, would be extremely difficult, if not impossible, according to Lauren Dudley, a research analyst at Rhodium Group, a New York-based economic-research firm focused on competition with China.

According to Dr. Shih, America may have created practically all of the components that go into contemporary electronics at one time or another, but much of that expertise has been lost as factories have been relocated abroad, engineers and technicians have retired, and no one has been taught to take their place.

Some supply chain and online experts believe the current change is going too far. Attempting to accomplish anything similar to EU leaders’ objective of digital sovereignty in the United States would be a mistake, according to Ms. Kilcrease. While it makes sense to manufacture chips and electronics for military systems here, this is still a small percentage of the overall amount produced each year. “We must remember the lessons we learnt about how very complicated multinational supply chains may contribute to innovation,” she says.

How do you think the move from supply chains to supply webs will effect electronic and other products availability? Participate in the discussion below.

Nothing in a global system of manufacture and transportation of commodities changes rapidly, no matter how much money corporations and governments spend. Reorganizing decades of globalization, including relocating both factories and the knowledge needed to manage them, is a Herculean effort that will cost a lot of money and time.

“You’re talking about a decades-long process to have this decoupling that a lot of people speak about,” Dr. Shih explains. “A great deal of dedication is required.”

Sign up for our weekly email to get more WSJ Technology analysis, reviews, recommendations, and headlines.

Christopher Mims can be reached at [email protected]